To communicate with a SQL Server database is to use the pervasive, but widely misunderstood, TCP protocol from the TCP/IP suite. Leveraging this layered model, SQL Server implements its Tabular Data Stream (TDS) protocol at TCP/IP’s application layer.

The numbering of the layers corresponds to the Open Systems Interconnection (OSI) model that TCP/IP is based on. Each layer implements one or more protocols and can be thought of as communicating with its matching layer on remote systems. SQL Server relies on the transport layer to implement error and flow control, which is an important point to consider when tuning SQL Server’s network performance.

Where do performance problems happen?

When data hits the network, there are a number of problems that can cause poor performance, including:

With the exception of poorly implemented applications, the transport layer is designed to deal with all these performance issues.

Suggestions for tuning and settings:

From a strictly SQL Server perspective there are a few things that can be done to improve network performance. The first tunable item is the size of the SQL Server network packet. Ignore the incorrect advice of making this size the same as your network’s Maximum Transmission Unit (MTU) size, typically just 1500 bytes. As it turns out, the TCP protocol, which SQL Server leverages, allows up to 64KB (with IPv4) chunks to be handed to it and it manages the task of dividing that up into smaller pieces for optimal transmission. In fact, setting the SQL Server packet size to such a small value causes more network overhead because each packet must have its own TDS header and requires SQL Server to do the dividing and re-assembly of the data. As a result, the maximum setting of 32 KB can be the best choice even if your environment only occasionally sends large query results.

Now, change the equation with NitroAccelerator:

While there are a number of things that can be done to marginally improve network performance, bringing NitroAccelerator into the picture changes the equation completely by:

There’s a visible difference on all networks

With NitroAccelerator optimizing your SQL Server traffic, you not only speed up your data intensive SQL Server processes, you also free up space on your network as shown in the three graphs below.

This first graph shows the instantaneous bytes per second transferred for a mix of small and large query results being run without NitroAccelerator: 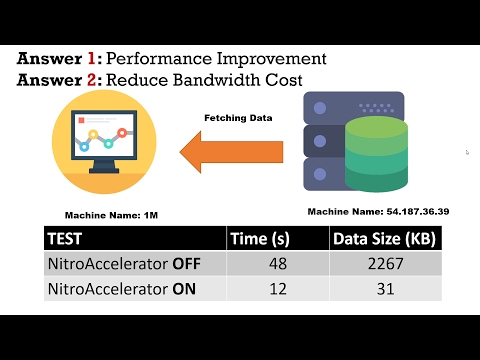 With the same set of queries, this graph shows the instantaneous bytes per second transferred with NitroAccelerator. Notice that with the exception of a very small peek, NitroAccelerator leaves significantly more headroom on your network for other traffic. 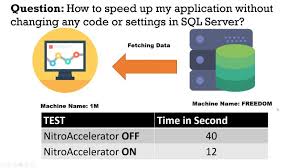 Finally, this graph shows the bandwidth your network would have to be capable of in order to provide the same performance that NitroAccelerator is making possible. The theoretical throughput in this case would be over 1 billion bytes per second over a WIFI connection. 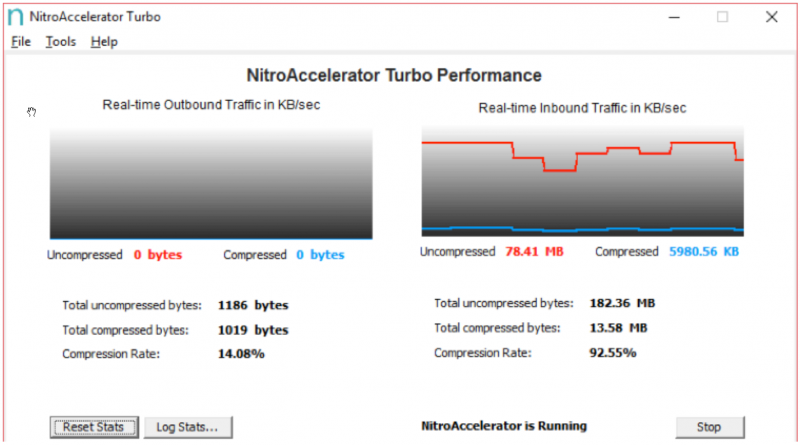