As networks have continued to get faster, so too have the lengths they span. Physics dictates that the farther something must travel, the longer it takes to make the trip. For network data, the time it takes a single bit of data to travel across the network and back is the latency that is the cause of many performance bottlenecks.

Most processes communicate using the Transmission Control Protocol (TCP), which requires round trip acknowledgements (ACKs) of data as it is transferred. These ACKs can have a large negative impact on data throughput.

If data packets must be acknowledged between endpoints, the pause and resume process of each individual ACK response will reduce the true bandwidth that can be used and will result in additional overall latency. Removing the need for this ACK from TCP would allow closer to the full bandwidth of a network to be leveraged.

A new approach to network acceleration built on proven software technology in our NitroAccelerator product is the proposed solution to removing latency from the TCP protocol.

We are calling the new acceleration technology the Zero Latency Data Channel (ZLDC) and is designed to improve the throughput of high-speed, high-latency networks (often referred to as long networks) beyond what our current core acceleration technology can do on its own. This core acceleration technology relies on compression and better usage of the TCP layer to reduce the amount of data transferred and better fill the TCP pipeline with the data transferred. Since less data is transferred, fewer acks are needed and while the overall impact is significant, those remaining ACKs still mean the full potential of the network isn’t being leveraged. Also, the core technology is limited to data that can be compressed, whereas, the ZLDC can improve even encrypted data streams.

With the ZLDC, NitroAccelerator will automatically route targeted protocols off TCP and through our own protocol built on the low-level User Datagram Protocol (UDP). With UDP there are no ACKs when sending data, but there’s also no guarantee of delivery or the order of the data that is delivered. That reliability of data that UDP lacks is why TCP exists and why it’s commonly used. Therefore, the ZLDC uses our own reliability layer that ensures data delivery without the ACK slowdown caused by TCP.

When enabling the ZLDC, it’s possible to attain overall network speeds much closer to the actual rated speed of the network even when compression isn’t possible such as with encrypted or already compressed data. If the data is compressible, the speed increase is simply that much greater. Our internal testing has shown returns of around 2x over our base acceleration when using a gigabit network with ~20ms round trip latency and even greater returns at higher latencies as the following tables of measurements from actual test runs show. 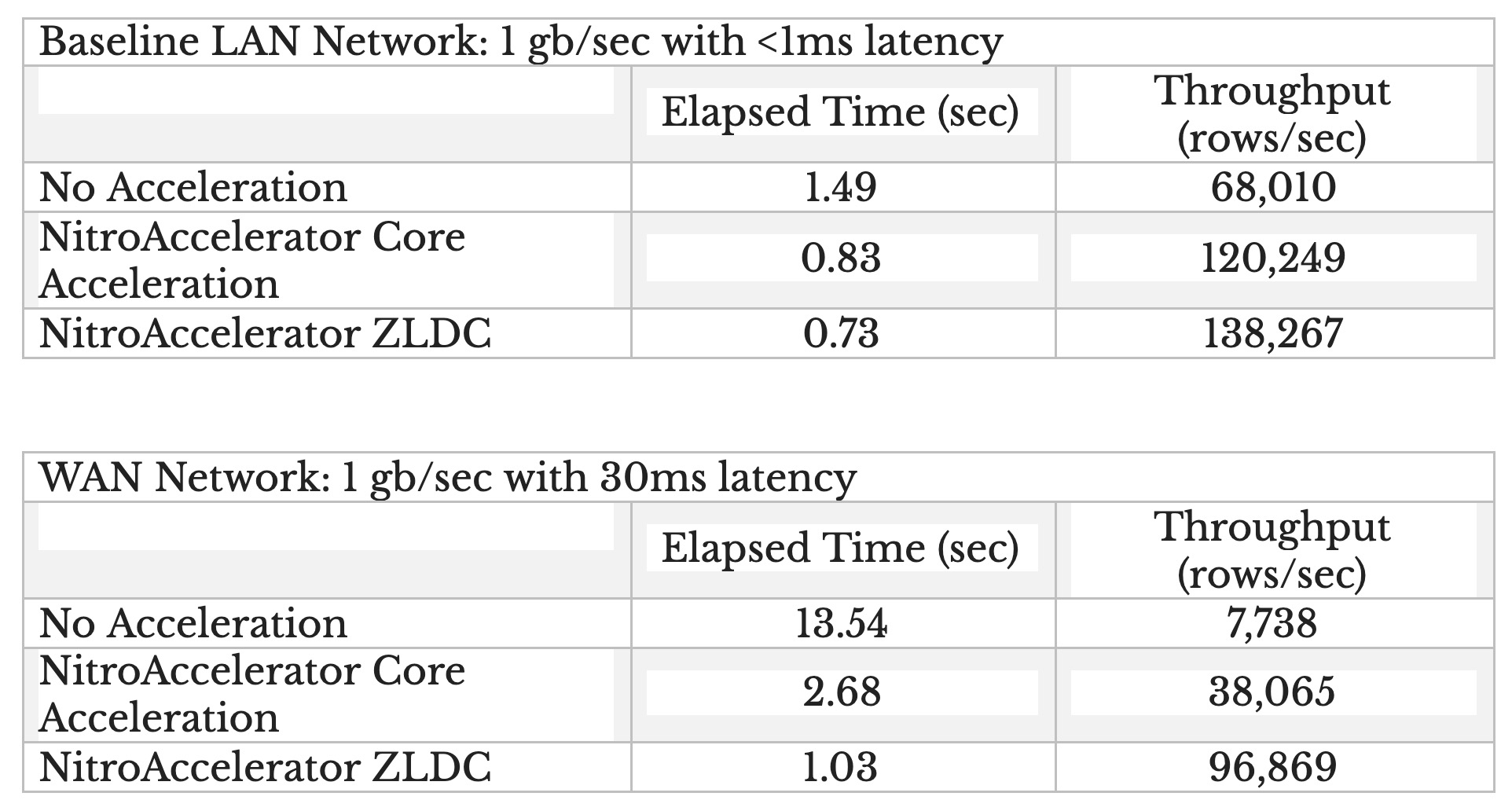 The tests were performed between a Windows Server 2016 system running SQL Server 2016 and a Window 10 system while using a virtual WAN. A test application built on Microsoft .NET Framework 4.6 was used. Each test run transferred 100,000 rows of data totaling approximately 240 megabytes of data. The results are the average of 10 runs.

As can be seen from the test data, moving to a network of the same bandwidth but with typical WAN latency of 30ms slams the breaks on transfer speed of an unaccelerated network with the elapsed time jumping from just 1.49 seconds to 13.54 seconds. Bringing the core NitroAccelerator technology into the picture brings that time down to 2.68 seconds, which is still far from the .83 seconds it achieves on the low-latency network. Whereas, the ZLDC technology brings the time down to 1.03 seconds which is close to what the core technology on the low-latency network. These tests show that using a protocol that doesn’t rely on round trip ACKs greatly improves throughput in high-latency environments.

Accelerate your end-to-end network traffic without configuration changes or downtime.